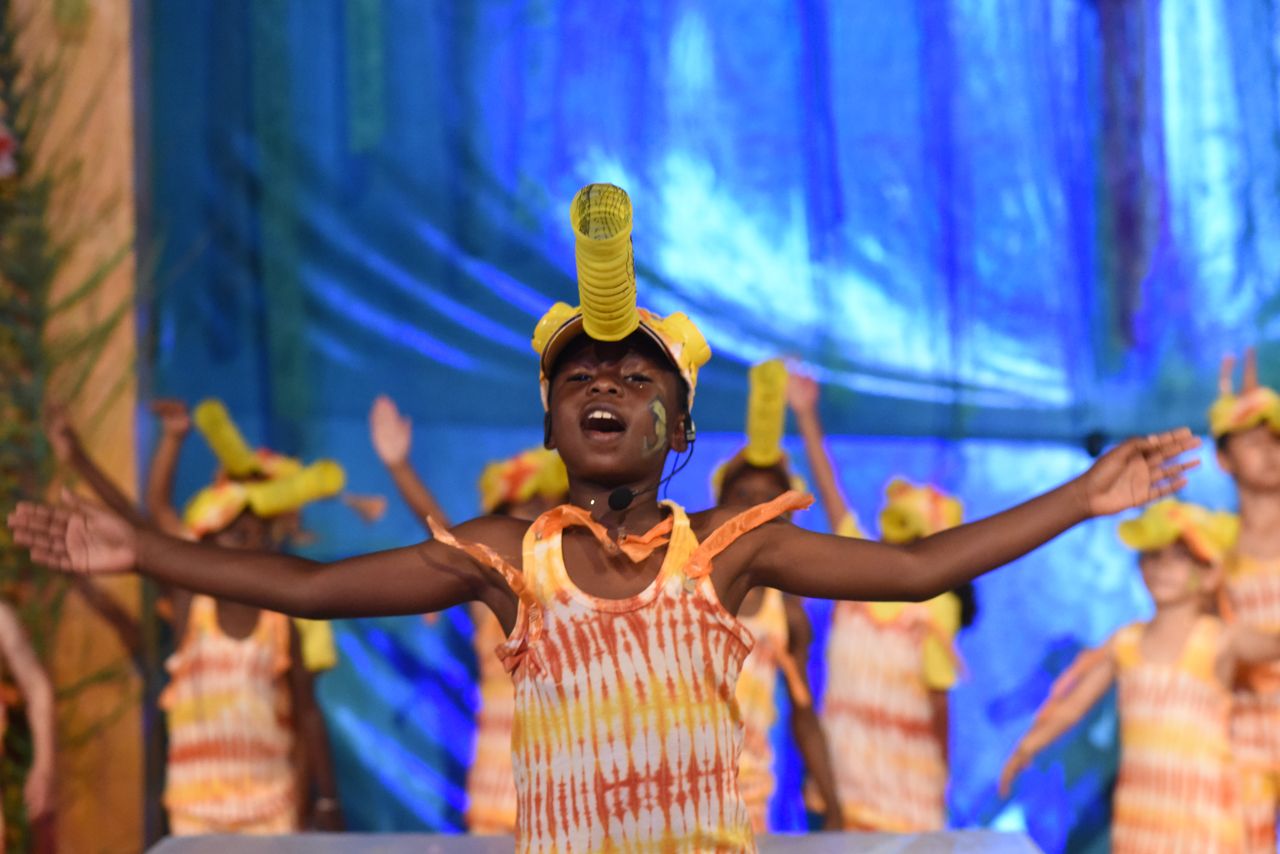 BAIS Musical 2020: The Journey of the Noble Gnarble!

BAIS believes in a holistic education that develops far more than reading and math skills. We develop confidence, public presentation skills and a passion for the arts. Every year BAIS puts on a musical in which all students perform to practice these skills.

On March 13th, 2020, all fifty-eight (58) BAIS students and eight (8) athletes for Special Olympics of The Gambia joined forces at the Ebunjan Theater to wow the audience at this year's BAIS musical.  This evening of the arts included musical performance, dance and stop motion animation skills and was opened by the honorable U.S. Ambassador to The Gambia, Richard Carl Paschall III, who shared with the audience his own experience in musicals and the power they have to teach discipline, teamwork and passion for life.

The BAIS & Special Olympics Dance group opened the show performing a dance to the song Don't Stop Me Now.  The lively music primed everyone for the theme of the evening -- to never give up!  The Pre-Kindergarten and BAIS Seedlings (2+ to 4 year olds) then took the stage in their fish costumes to sing and dance to two songs set in the ocean. They charmed the audience and projected their very small voices loudly through the theater.

As the Pre-Kindergarten students exited stage to thunderous applause, the house lights went down and a series of animated shorts were screened by BAIS art teacher, Leah Woldman. The stop-motion animation was exceptionally advanced! Students in grades 3-8 used various materials to create their stories and showed action from multiple perspectives.  The audience was impressed by both the artistic ability and the tenacity of the film-makers in taking over 1,500 photos to create just 60 seconds of video.

After the video applause quieted, the stage lights came up slowly on a scene of mermaids and mermen in a setting of coral and marine creatures in a fabric sea of glistening blue.  The were the narrators who sang the introduction to the story "The Journey of the Noble Gnarble" and led us into the musical!  David John of grade 2 starred as the noble Gnarble (a sea-bottom dwelling fish) who decided he wanted to see the sky at the top of the ocean. The other Gnarbles and the manta ray like Blyfish (Kindergarten through grade 2 students) tried to discourage him from setting out on his journey, to no avail.  As Sainabou's character put it in her line, "I just don't see it happening."

The Noble Gnarble soon questioned his decision after meeting with a group of Warckels with French accents (grade 5-7 students) who would have eaten him but he looked to skinny to be a fine meal. He questioned his decision again when the shark-like Subbalubbles (grades 6-9) entered and began to sing and dance in their big production number Time to Eat. Fortunately, while they were carried away in their singing and dancing, the Noble Gnarble was rescued by the Glinny Glims (grade 3-4 students).

Then came the lesson of the evening, the Noble gnarble wanted to give up and go back to the sea bottom but the Glinny Glims cheered him up singing the number "Always keep your fins up, and swim!" Just as he neared the top of the ocean, however, the Noble Gnarble was swallowed by the whale-like Plink (a huge beautiful amazing creature crafted by Ms Leah Woldman). He escaped by remembering the words of the Glinny Glims. He began swimming with his fins up, which tickled the Plink and allowed him to escape while the Plink laughed.

In the finale, the theater was filled with song as all characters entered the stage again and sang as we witnessed the Noble Gnarble reach the top and see Sky!  The students took their bows and came back out proudly for curtain calls and photos. They were actually so excited that they sang the finale again!

A musical never happens without a team effort. This musical was made beautiful by the fabrics and costumes. These were generously provided by Fady Ghanim of the Emporium, and we cannot thank him enough for the support of the Emporium.  Amazing fish costumes were sewn by Yancouba Silla, tailor at Leybato Beach.  Daniel Twum, the music teacher, worked with all students to help them learn all the music and lines, Kelly McAllester, grade 3/4 teacher, handled choreography and blocking, Monsieur Diantrec Edward Badjie worked with the Warckels to add French lines to the script, Ms Kim ran the activity to help Special Olympics with collaboration of Cecilia of SOTG and with choreography from Ms Lin of the Gambia Ballet Factory, Ms Elin, Ms Awa and Ms Mariama worked their magic with Pre-K, and Ms Leah Woldman and Mr Valentine made the amazing set. Thanks always to former BAIS parent, Siam Bourghi, the Village, for doing the very cool makeup for the performers!  No BAIS event happens without the support of our BAIS Maintenance Crew nor without Mr Scott capturing the photos. Jerejef all!

It was a wonderful evening and we are very happy that it was able to be presented just before schools were closed due to the global pandemic.  When we start feeling depressed or sad about school being closed, we just open a Zoom meeting and sing a song from the show together!